This is a text widget. The Text Widget allows you to add text or HTML to your sidebar. You can use a text widget to display text, links, images, HTML, or a combination of these. Edit them in the Widget section of the Customizer.
Posted on December 4, 2017December 7, 2017 by nationalcinemas123

Germany’s film output was largely insignificant and the country relied heavily on international films from America, France and Denmark to bring in money. At the outbreak of war, Germany’s films were banned in America and France for obvious reasons, but Germany was in no position to do the same as they couldn’t afford to cut off their main suppliers of films. However, in 1916, in a bid to fight international competition, the German Government banned all international films, and invested in the making of their own propaganda films. The state of Germany, after their defeat during WW1 was rather dismal. Germany was a country wracked with poverty and mass hunger; the people were angry, and their spirits were low. This defeated nation was in despair and the people needed a way of escape.

German Expressionism is widely recognised by its unique visual style; its use of hard shadows, low-key lighting, heavy distortion of shapes and lines, theatrical action and themes of death, horror and insanity. These elements clearly reflected the state of mind of the filmmaker expressing the fears and emotions felt towards the state of Germany.

The first key Expressionist film to emerge from Germany was The Cabinet of Dr. Caligari which features harsh, sharp lines and unusual angles to give a sense of unease and insanity. The film is a dark and twisted visual representation of social and political issues at the time. Siegfried Kracauer in his book ‘From Caligari To Hitler’, suggests that the film is a premonition of Hitler and the Nazi Party’s rise to power. The same can also be said in relation to Nosferatu. 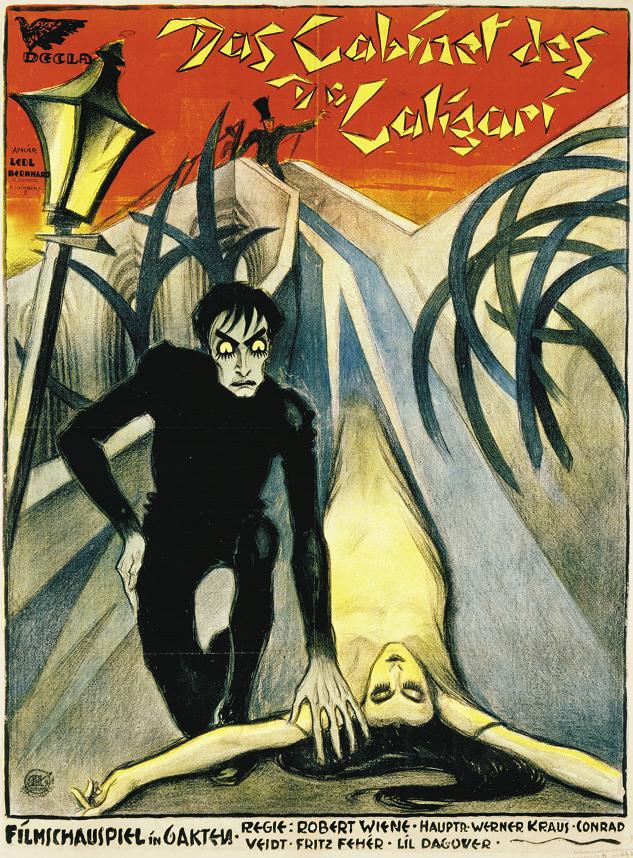 The film, like Caligari can be seen as a premonition of Hitler and the Nazis’ views on the Jewish community and the constant “threat” from across the borders. It seems the character of Count Orlok is an ‘other’, he lives on the edges of society and embodies the Nazi’s discriminating ideas that Jews were “sucking the life” out of Germany both religiously and financially. The film’s interpretation of what a vampire is, is incredible different to the types of vampire we are associated with from films like Twilight and The Lost Boys for example. His features, like the architecture in German Expressionism, are sharp and harsh; his ears, eyebrows, nose and his fingers.

Nosferatu is arguably one of the most famous and iconic German Expressionist films. It is a silent horror film based on Bram Stoker’s novel ‘Dracula’ , however, the filmmakers never gained the rights to adapt it into a film and so Stoker’s heirs sued the film and were granted a court ruling, ordering the destruction of all copies of the film, though some survived.

The film’s use of shadows and sharp angles is striking. It gives us a sense of unease and insecurity. Nosferatu/Orlok is often shot through low angles and we are forced to look up to him as he towers above us, much like Christopher Lee in Dracula (below).

Nosferatu remains a key film in cinema history and in popular culture. It influenced Hammer’s adaption of the classic novel, not to mention the countless contemporary vampire films you can sink your teeth into nowadays.

One thought on “German Expressionism”

Hi, I am a student at the University of Derby. I have been assigned to create a blog discussing different Cinemas from around the World. Enjoy! View all posts by nationalcinemas123